for our Club's Annual Meeting of Members 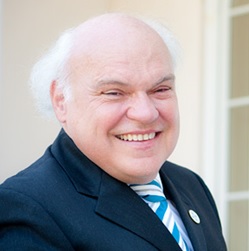 The knowledge explosion, rapid economic change, and the pandemic have brought significant changes to higher education and academia. Different institutions will have to adapt to meet the needs of students and the communities they serve, and how they adapt will necessarily differ depending on the nature and circumstances of each institution.

In this talk, Dr. O'Shea will examine some of the trends and the particular challenges and opportunities different institutions and types of institutions face, with especial emphasis on research one universities (e.g. Harvard) and on liberal arts colleges (e.g. New College). As higher education evolves, collaboration among institutions will become ever more crucial.

He also introduced a first-year program to support new students in their transition to college, internationalized the curriculum, formed a group of presidents and deans of women’s universities around the world, started collaborative programs among northeast liberal arts colleges for department chair development, oversaw four building projects (including a $32 million science construction and renovation project) and consolidated science and arts programming and planning. In addition, he directed an $11.5 million project, funded by the Mellon Foundation, to allow students to couple their academic experience with off-campus pre-professional experiences.

O’Shea earned his undergraduate degree in mathematics from Harvard University and his master’s and doctorate from Queen’s University in Kingston, Ontario, a prominent Canadian Research I university. He was a visiting professor in major universities in the U.S. and abroad (U. of Cambridge, UK; U. of Miami; U. of Hawaii; Universität Kaiserlautern, Germany; U. of Massachusetts, Amherst; Institut des Hautes Etudes Scientifiques, Bures-sur-Yvette, France). He has seven books and monographs to his credit, numerous research articles and book translations from Russian and French.

Born in St. John, New Brunswick, Canada, O’Shea and his wife, Mary Barker O’Shea, have four grown children. His hobbies include opera, cooking and spending time with his family.

After the discussion, there will be time for Q&A.  Please utilize the Q&A function in Zoom Webinar.  We will take as many questions as time allows.  The webinar will last for approximately one hour.

(After registration, you will receive an Order Confirmation email that includes the Zoom Webinar ATTENDEE information!)
All Members of the Harvard Club of Sarasota, Harvard alumni, and Guests are Welcome!
WE LOOK FORWARD TO "SEEING" YOU THERE!!